First tour sold out in 2016, second in 2017… now Aurie returns with his third stand up special ‘JUST LIKE THAT’ touring around the UK this Autumn. Now older (as he looks), wiser (so he thinks), and wilder than before, plus a few bonus extras & special guests.

Touring some previous favourite cities, and touching a few new areas of the country, AURIE STYLA will be delivering over and hour of punches, funny stories, relationships, work, travelling and more!. One mic, Twelve shows, and a partridge in a pear tree… Go and get your tickets, Just Like That!

No videoing is allowed during the performances, except when prompted by Aurie Styla. Anyone who does not follow this, will be removed from the building, and no refund will be issued

MORE ON THE DOOR (If Available)

All tickets are subject to a booking fee. 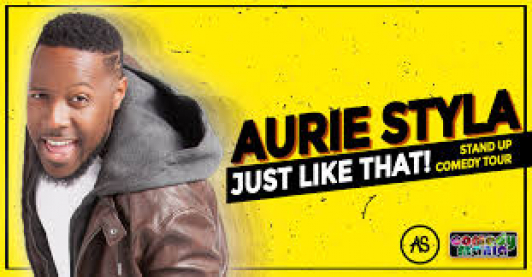